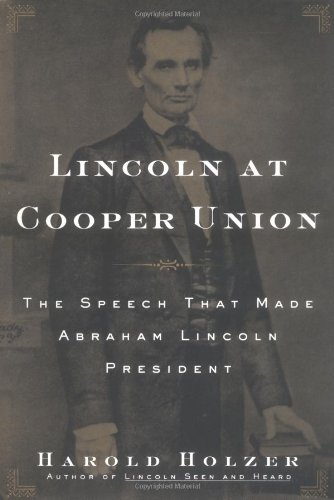 LINCOLN AT COOPER UNION: The Speech That Made Abraham Lincoln President

Few people know more about Abraham Lincoln than Holzer (editor of ; ; etc.). This fine new work focuses on a widely known but little studied address that Lincoln delivered early in 1860 in New York City, which Holzer believes made Lincoln the Republican candidate and therefore president. While one has to credit other political and historical factors, Holzer is probably right. Surely no one will again overlook this masterful speech, even if it never rose to the eloquence of the Gettysburg Address. That's precisely one of Holzer's main arguments: that the speech was intended as a learned, historically grounded, legally powerful rebuttal to claims of Lincoln's great Democratic opponent, Stephen Douglas, about the constitutionality of slavery's spread into the territories. But how, Holzer asks, did a long speech hold its audience at Cooper Union and then infuse tens, perhaps hundreds of thousands of newspaper readers with enthusiasm for the man? The answer lies in large part with the nature of American culture—a highly politicized one of readers—in the 1860s. But as Holzer also makes clear, Lincoln conceived of the speech as part of an astute strategy to win his party's nomination. While his political wizardry will surprise few readers, they'll learn again how it was combined with intellectual power and a fierce determination to clarify his moral convictions. It was on this visit to New York that Matthew Brady shot his most celebrated portrait of Lincoln (which appears on the book jacket). Holzer devotes a fascinating chapter to this episode.