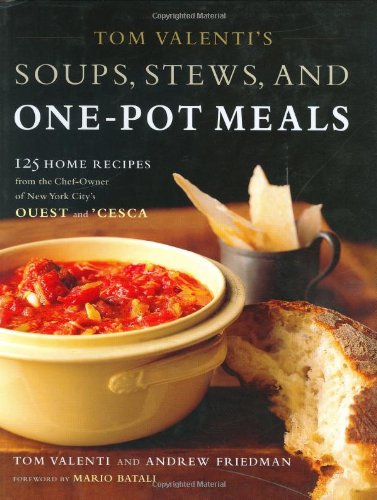 Valenti (chef/owner of Ouest and another Manhattan restaurant slated to open later this year) would seem particularly well-suited to write a cookbook (with the apparently indefatigable Friedman) on homey one-pot meals. After all, he made his name with a lamb shank cooked gently until it falls off the bone (presented here with a slight variation as Moroccan-Spice Braised Lamb Shanks). There's a slackness here, however, not in the recipes themselves, which are uniformly tight and well-written, but in the dishes, which run along the very familiar lines of Classic Braised Beef Brisket and Pasta and Bean Soup. It's a shame, too, because when Valenti perks up a recipe with imagination he scores big: Turkey Soup with Stuffing Dumplings makes ingenious use of Thanksgiving leftovers, and the technique used in Olive-Oil Poached Red Snapper with Tomato and Scallions will be new to many. Valenti employs a snappy tone that sometimes slips into snide, as in a headnote for a very simple Silken Corn Puree in which he rails against writing that describes "food as a season on a plate or in a bowl." He also takes a refreshingly home cook–oriented approach in his introduction. A foreword by Mario Batali adds little, aside from informing the reader that both chefs find dish-washing odious.

Welcome to My Kitchen