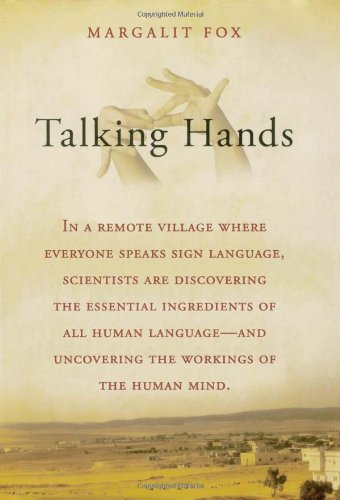 he world of sign languages and cognitive research comes to life in this story of a remote Israeli village that's become a test bed for understanding how the human brain processes language. reporter Fox follows researchers, led by University of Haifa professor Wendy Sandler, to the Bedouin village of Al-Sayyid, where isolation, genetics and inbreeding have led to a higher than usual percentage of deafness in the population. In response, the villagers have created a home-brew sign language used by both the hearing and deaf. By studying this unique language, Sandler and her cohort hope to gain deeper insight into how the brain acquires and uses language. Chapters alternate between the painstaking work in Al-Sayyid and a history of sign language itself. Both are gracefully reinforced with vivid examples, from the early insistence of “experts” that proper sign language must produce words in one-to-one correspondence with spoken language to a lively gathering in Al-Sayyid where conversation flows freely in six languages: English, Hebrew, Arabic, American Sign Language, Israeli Sign Language and the local sign language. Fox takes readers on a fascinating tour of deaf communication, clearly explaining difficult concepts, and effortlessly introducing readers to a silent world where communication is anything but slow and awkward.