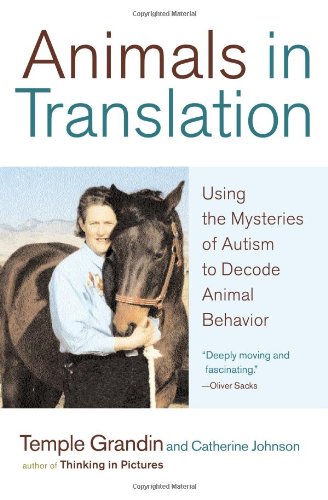 ANIMALS IN TRANSLATION: Using the Mysteries of Autism to Decode Animal Behavior

Philosophers and scientists have long wondered what goes on in the minds of animals, and this fascinating study gives a wealth of illuminating insights into that mystery. Grandin, an animal behavior expert specializing in the design of humane slaughter systems, is autistic, and she contends that animals resemble autistic people in that they think visually rather than linguistically and perceive the world as a jumble of mesmerizing details rather than a coherent whole. Animals—cows, say, on their way through a chute—are thus easily spooked by novelties that humans see as trivialities, such as high-pitched noises, drafts and dangling clothes. Other animals accomplish feats of obsessive concentration; squirrels really do remember where each acorn is buried. The portrait she paints of the mammalian mind is both alien and familiar; she shows that beasts are capable of sadistic cruelty, remorse, superstition and surprising discernment (in one experiment, pigeons were taught to distinguish between early period Picasso and Monet). Grandin ( ) and Johnson (coauthor of ) deploy a simple, lucid style to synthesize a vast amount of research in neurology, cognitive psychology and evolutionary biology, supplementing it with Grandin's firsthand observations of animal behavior and her own experiences with autism, engaging anecdotes about how animals interact with each other and their masters, and tips on how to pick and train house pets. The result is a lively and absorbing look at the world from animals' point of view.