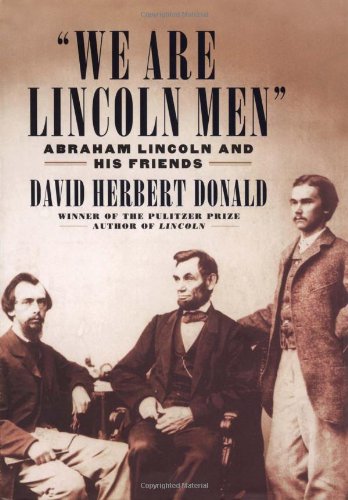 "WE ARE LINCOLN MEN": Abraham Lincoln and His Friends

Two-time Pulitzer Prize winner Donald delivers a highly readable portrait of Lincoln's closest friendships in a volume that nicely complements his preeminent biography of our 16th president. Donald's focus is on six key players: Joshua Speed, William H. Herndon, Orville H. Browning, William H. Seward and the president's private secretaries, John Nicolay and John Hay. With regard to the young Springfield entrepreneur Speed, Donald astutely dismantles the so-called "evidence" for a homoerotic relationship, pointing out that during the four years Speed and Lincoln shared a room and a bed (then a common practice among budget-conscious young men) both were quite energetically involved in quests for wives. Interestingly, no less than three of the six friends delineated by Donald also became Lincoln's biographers. William H. Herndon—about whom Donald has previously written a book—started out as Lincoln's law partner in the fall of 1844 and wound up doing vital, sometimes scandalous, sometimes spurious research culminating in a seminal biography published in 1889. The work of Nicolay and Hay was primarily intended to refute much of Herndon's scandalous accounts regarding Lincoln's lineage, frontier romances and unhappy marriage. Perhaps the most complex and informative of Donald's portraits is that of Orville Browning, a longtime Springfield associate and fellow attorney who served briefly as senator from Illinois during Lincoln's first term and whom Lincoln passed over no less than three times when given the opportunity to nominate him to the Supreme Court. Friendship had its limits.