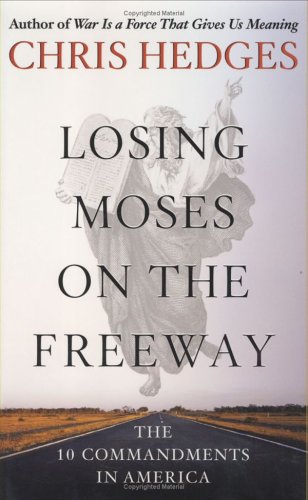 Losing Moses on the Freeway: America's Broken Covenant with the 10 Commandments

Hedges, a correspondent at the , first made a name in the book world with his remarkable study . Now Hedges, the son of a Presbyterian minister, brings together ruminations on the 10 Commandments. Inspired by Krzysztof Kieslowski's (a series of 10 films, each based on one of the commandments) each of these pieces profiles someone who has "struggled on a deep and visceral level with one of the commandments." Some of the chapters—like Hedges's meditation on how consumerism becomes a way of taking the Lord's name in vain—are quite profound. And some of the connections he makes are refreshingly creative; his chapter on idolatry, for example, tells the story of a young woman who makes an idol out of the rock band Phish. But sometimes, he's banal ("Time is short. Life is brief"), and sometimes Hedges's very creativity drains his profiles of impact. The chapter on greed, for example, portrays a woman named Karen Adey, who dreams about becoming a multimillionaire and has hemorrhaged thousands of dollars attending self-help seminars in an effort to make her dream come true. This chapter could have resonated more if he had written about someone whose covetousness was just as pervasive, but a little more run-of-the-mill, like the college kid who goes into credit card debt buying clothes and CDs he doesn't need. Although this exploration of the 10 Commandments is uneven, much of it is provocative.