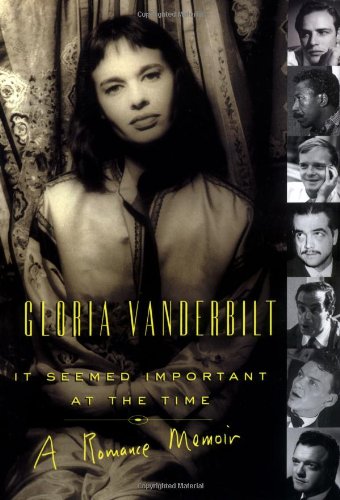 IT SEEMED IMPORTANT AT THE TIME: A Romance Memoir

Not surprisingly, it takes an older woman to write a great kiss-and-tell memoir—who else would have enough lovers under her belt? Vanderbilt opens with an appetizer of schoolgirl sex with a chum from Miss Porter's School in the 1930s and then regales readers with a star-studded cast of intimates—Howard Hughes, Leopold Stokowski, Bill Paley, Marlon Brando, Gene Kelly and Frank Sinatra, among others. Some were one-night-stands, some torrid affairs; three or four she even married. Romance, after all, is "the search for something else, a renewal and a hope for transformation in life." In her less giddy moments, Vanderbilt considers how some of this relentless love-affairing may have been provoked by an unhappy childhood. She was only 10 when her mother lost custody of her in an infamous public trial; young Gloria was sent to live with cold Aunt Gertrude Whitney. When she was 21 and inheriting her fortune, husband Stokowski persuaded her to cut off financial support for her mother, which alienated mother and daughter for another 20 years. While there's a little venting about men who've swindled her, it's the dishy gossip—Paley chasing her around the sofas in his living room, Truman Capote basing on life at her brownstone—that keeps the pages turning. Even in the last chapter, Vanderbilt's going on about some man who's "the Nijinsky of cunnilingus." Ah, toujours l'amour! Photos.