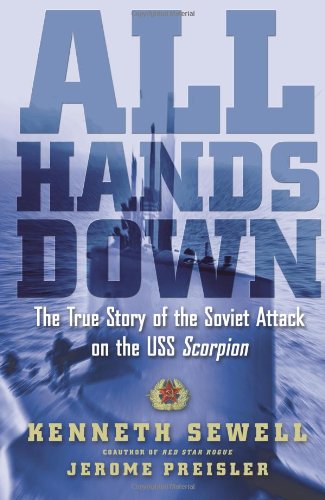 All Hands Down: The True Story of the Soviet Attack on the 'USS Scorpion'

Controversy has steadily shadowed the 1968 sinking of the U.S. nuclear submarine . The navy's official version of accidental sinking on a routine mission was challenged by allegations that the was in fact torpedoed while shadowing a Soviet task force. Further rumors indict the spy John Walker for providing confidential codes to the Soviets, enabling them to track the submarine. Yet another account purports that the Soviets destroyed the in retaliation for the sinking of one of their own subs. The two navies eventually called a truce rather than risk further disrupting relations. Sewell, a submarine veteran, and Preisler, a writer of techno-thrillers, add little new evidence in their version of the story; their new data is unfailingly familiar and they never succeed in making a persuasive case for the conspiracy and cover-up they claim occurred. Instead, Sewell and Preisler devote more time to anecdotes about the 's crew and their families and little vignettes of the routines on board a nuclear sub. What is undeniably useful is the book's demonstration of the high numbers of accidents between ships and aircrafts that were accepted as routine during much of the Cold War. highlights a truth no less relevant today: international incidents are in good part constructions mutually agreed upon after the event.