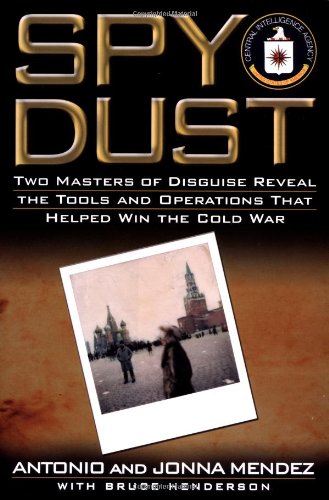 SPY DUST: Two Masters of Disguise Reveal the Tools and Operations That Helped Win the Cold War, as Authorized by the CIA

Retired CIA disguise expert Antonio Mendez ( teams up with his wife, also a former agent, to reveal how they fell in love—during a highly critical mission in the waning years of the Cold War. Antonio and Jonna shift back and forth in their account as separate assignments eventually converge in the extrication from Moscow of a high-ranking KGB mole, jeopardized by the traitorous dealings of men like Aldrich Ames and Robert Hanssen. Fans of Alan Furst's WWII espionage novels will appreciate the subdued nature of this thriller, where the stakes are always high but the individual actions are usually low-key, as well as the details the Mendezes provide on the art of eluding surveillance. The title is a red herring—although "spy dust" was a real element of the KGB's operations against foreigners in Moscow, its role in this story is of a background nature. The climax hinges on a much more old-fashioned game of cat and mouse. There are a few weak spots in the narrative, where the authors (or their collaborator, true-crime scribe Henderson) try to recreate scenes at which they weren't present, but for the most part this is an entertaining thriller with the added virtue of being true. 16 pages of b&w photos not seen by