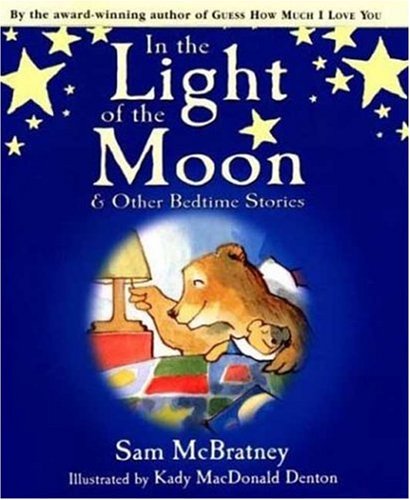 IN THE LIGHT OF THE MOON & Other Bedtime Stories

McBratney's () eight bedtime tales mix familiar and unfamiliar stories with a generous helping of Denton's () lighthearted vignette and full-spread illustrations. "Brother Bear" tells the traditional Jewish folktale about two brothers who covertly look after one another (two recent versions are Frances Harber's and Neal Waldman's ). Several original tales prove that the author knows the power of a good opener: "There are parts of the world where the days are warm and the nights are never cold," begins "Big Bog Frog and Little Umbel," a story of a frog bully who get his comeuppance from an elephant. Unfortunately, in several of the stories, McBratney's promising momentum soon falters; while often funny, a few of these tales do not develop a compelling narrative arc. But all of the tales will be new for the target audience, and Denton's ebullient spot watercolors lend a sense of character and shape to each. She suffuses her pictures with light and airiness, and peppers them with a hearty dose of vaudevillian humor. In "The Fox Who Liked Eggs" (featuring a new plot for Henny Penny, Goosey Loosey et al), for instance, the story calls for the title villain to dress up as the Wise Old Bird in order to trick the birds out of their eggs; Denton decks him out in an extravagant and outlandishly comical feathered ensemble. Ages 3-6.