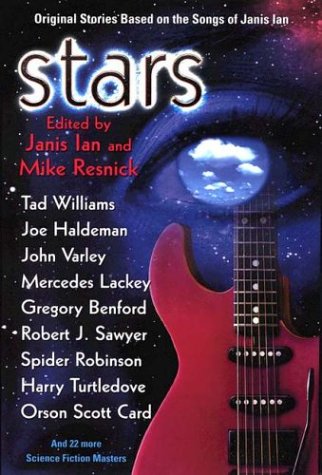 This dazzling, highly original anthology, ignited by the meeting of songwriter Ian and a host of SF writers affected by her music at the 2001 Worldcon, showcases 30 mostly superior stories, each based on one of her songs. Some contributors take Ian at her word that science fiction is "the jazz of prose," responding to many of society's sharpest wounds with bittersweet improvisatory descants, like Terry Bisson in "Come Dance with Me," David Gerrold in "Riding Janis" and Orson Scott Card in "Inventing Lovers on the Phone," tales that probe the angst of adolescence. Spider Robinson, in "You Don't Know My Heart," like Gerrold in "Riding Janis," deals with the societal rejection gays and lesbians often face; "Immortality," by Robert J. Sawyer, and "Society's Stepchild," by Susan R. Matthews, respond to Ian's poignant "Society's Child," a plea for genuine racial tolerance; Stephen Baxter's "All in a Blaze" and Nancy Kress's brilliant "EJ-ES" confront the pain of aging; and several alternative-world tales, especially Harry Turtledove's powerful "Joe Steele" and Howard Waldrop's "Calling Your Name," explore the entrapment of the individual by sociopolitical forces engendered by materialism. The entire anthology seems to vibrate with the death throes of one world passing away, while far stranger ones struggle to be born. Their commonality, Ian tells us in her introduction, is that "They have heart. They have life. They have truth." No artist—nor any reader—could ask for more. (