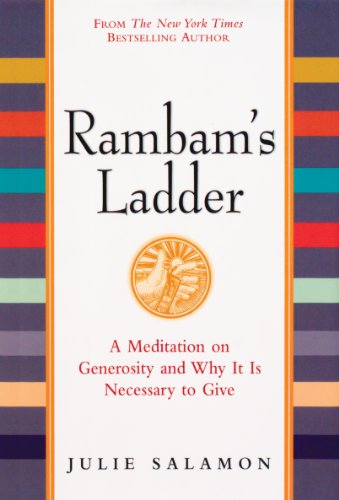 Rambam (also known as Maimonides) was a 12th-century Jewish scholar and physician to the Egyptian sultan. Among his influential writings on Jewish law is an eight-step program on giving to the poor. Salamon () provides a thoughtful exploration of each one of Rambam's steps, from the lowest kind of charity—giving begrudgingly—to the highest form—the gift of self-reliance, so that the recipient, through a loan or a job, will not have to beg again. Salamon grounds her philosophical musings with concrete descriptions of how charity is practiced and regarded in contemporary life. For example, the second part of step four—handing money to the poor before being asked, perhaps shaming the recipient—is embraced by conservatives like Gertrude Himmelfarb, who believes that those who receive handouts should feel ashamed. Running through Salamon's well-crafted and nuanced prose is a personal anecdote about David, a homeless man who approached her on the street. At first, she would only refer him to the agency where she volunteered (the Bowery Residents Committee) or give him money reluctantly (step one). As she came to understand his story, Salamon began to hand David money without being asked (step three). On September 11, 2001, Bowery Residents clients, usually on the receiving end of charity, offered water, chairs and other assistance to people fleeing the World Trade Center disaster. Drawing a humanistic and inspirational message from Rambam's ladder, Salamon is convinced that, in the end, we are measured not by what we have, but by what we give to one another.