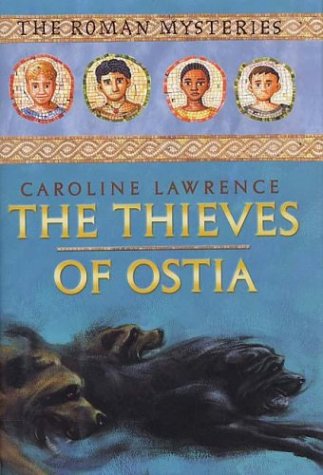 THE THIEVES OF OSTIA: A Roman Mystery

In this atmospheric debut novel, the first installment of a planned series, readers are whisked to the first century A.D. to help girl detective Flavia Gemina solve a brutal crime in the Roman port city of Ostia. When the guard dog belonging to Flavia's secretly Christian neighbors is slaughtered, Flavia sets out to find clues. She is accompanied by four trusty companions: Jonathan and Miriam, the Christian children; Nubia, a slave girl whom Flavia has recently acquired with her birthday money (with the purpose of emancipating her); and Lupus, a mute beggar boy. Many adventures later—a pack of wild dogs chases them, they narrowly escape malicious slave traders and discover that their chief suspect has committed suicide by jumping from a lighthouse—the children catch the culprit. Those looking for thrill-a-minute entertainment will find their fill of near-catastrophic events here, but the violence may be hard for some readers to stomach. Red herrings emerge too conspicuously and dialogue is sometimes stilted. Nonetheless, this historical mystery offers an intriguing glimpse into the customs, attitudes and class systems of the Roman empire. Ages 9-14.