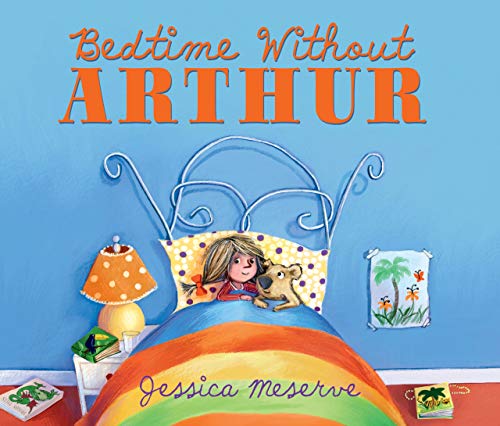 Bella can't imagine sleeping without her stuffed bear, Arthur. A black belt in karate, Arthur “guards the bed and keeps away monsters that come sneaking from the shadows,” so Bella can safely dream “of her favorite things, like rainbows and rainforests.” Then Arthur goes missing—and in uncovering the culprit, Bella also discovers something new about herself. Meserve ( ) is an overly literal writer; it's as if she underestimates her effectiveness as a visual storyteller. Which she shouldn't, because—as befits a book about nightmares, sweet dreams, and strong attachments—her pictures are florid, dramatic, and often skewed in perspective. When Arthur disappears, Bella's cast-iron bed takes on an almost prisonlike quality, as “fire-breathing dragons, slugs and grizzly bears” threaten (even the small stuffed elephant in the corner of her bedroom has a menacing glint in its eye). Meserve's artwork propels the story forward, skillfully mixing drama and comedy, and makes a persuasive case for being an empathetic and decidedly grown-up older sibling. Ages 4–9.