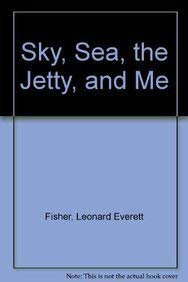 SKY, SEA, THE JETTY, AND ME

Fisher, who spent his childhood in a Brooklyn seashore community, here handily imparts his familiarity with and fondness for this setting (which fans may recognize from ). "Low tide and daylight were my tide and time. The jetty was my place," recalls the young narrator, pictured sitting on the rocks as the vast ocean stretches out before him. Fisher's paintings chronicle a sudden storm, when the sky darkens at noon, the wind suddenly picks up and lightning appears in the distance. The boy scampers to his beachside home to wait out the short-lived squall before returning to his beloved perch on the jetty. Economy and drama pervade both Fisher's text ("A misty squall born in the open sea and pushed by a phantom engine thundered toward me") and his evocative acrylics. The artist's skillful manipulation of light and darkness convincingly conveys the transformation that the storm brings to the once placid locale, though, unfortunately, the boy himself faces away from readers more often than not. A photo on the back flap of Fisher and his brother as youngsters, fishing from a familiar-looking jetty, underscores the author's enduring—and endearing—affection for "the ever-rolling sea." Ages 5-8. (.)