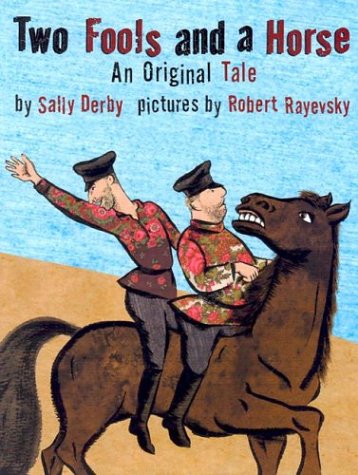 TWO FOOLS AND A HORSE: An Original Tale

Two slow-witted peasants who suspect a peddler of hiding a stolen horse in his knapsack turn out not to be as dumb as they may appear in Derby's () verbose tale. After trailing and confronting the peddler, Janski and Wilhelm discover that the stranger has only pots and pans in his sack—or so it seems. Out come an accordion, a cuckoo clock, ducks, a goose and "a hundred or so other things." After the townspeople buy many of the contents and head home, the fellow lets loose the horse, which spirits away the peddler. But the poor fools never even get to witness their vindication. Rayevsky's () wildly individualistic style brings some much needed magic to the prolonged proceedings. His rural, Old World setting springs to life with an apparent collage of ink, earthy, striated paint and photographs of loud, vibrant patterns. (The villagers, in traditional gray peasant caps, sport pink floral and paisley shirts.) But unnecessary repetition ("The peddler was long and skinny, and a large blue bundle was slung over his shoulder. With his large blue bundle and his unshaven face, he looked stern and sinister"), similarly excessive dialogue and a disappointing conclusion hobble the text. Ages 5-8.