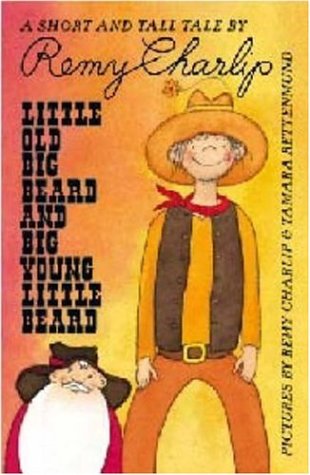 The captivating illustrations in this oversize vertical volume lend much-needed verve to a meandering, shaggy dog story with a punch line about a cow named Grace. The textured watercolors feature unusual perspectives and design elements with childlike, cheery drawings of the title characters, two appealing cowboys. The deliberately repetitious opening focuses a great deal on the characters' height and the length of their beards; the plot, about the search for Grace, does not commence until page nine. While the spoofing is good-natured ("Now, as you know, you can't be a cowboy unless you have a cow," says the narrator), the mannered delivery will not be to everyone's taste. Eventually, Big Young Little Beard, standing in a pool of tears, hears a moo and says, "We have found Grace." But Little Old Big Beard, who is "older and wiser," says, "I think it would be more honest to say that Grace has found us." The last page features the cowboys singing "A-grazing Grace how sweet you found such wretched souls as we," a joke that will only be lost on readers unfamiliar with "Amazing Grace"; it would probably sound better if performed by Charlip's () Paper Bag Players. Ages 3-8.