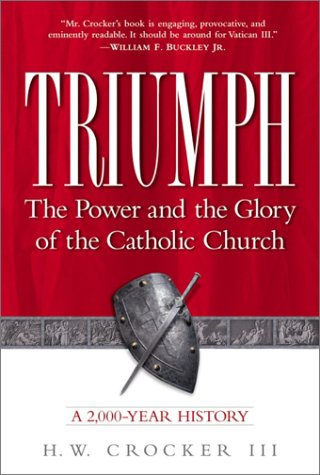 TRIUMPH: The Power and the Glory of the Catholic Church; A 2,000 Year History

If history, like beauty, is in the eye of the beholder, then writer and novelist Crocker () obviously liked what he saw when he looked at the 2,000-year life of the Catholic Church. A convert to Catholicism from Anglicanism, Crocker has produced an exhaustive, thoroughly sourced narrative which reflects his love for his chosen faith. Although his accounts of episodes like Christianity's East-West split and the Inquisition will be seen by some as mere defenses of the Roman church, Crocker has made a creditable attempt to place events in a more balanced context, providing details that are typically downplayed by or absent from more critical chronicles. For example, he acknowledges that tortures and executions occurred during the Inquisition and does not excuse them, but he also observes that they were miniscule compared to the bloody conflict that was to follow as a result of the Protestant Reformation. Crocker's treatment of reformer Martin Luther seems unnecessarily harsh at a time when relations between Lutherans and Catholics have been steadily improving, as witnessed by the 1999 signing of the Joint Declaration on the Doctrine of Justification. In discrediting Luther and his purposes, Crocker dredges up a multitude of the reformer's personal flaws, calling him an "ill-tempered, unbalanced, and unhappy monk." He is much kinder to reformer John Calvin, whom he deems "undoubtedly the finest theologian the Protestant churches ever had." Readers interested in a detailed history that minimizes criticism of the Catholic Church will most appreciate this work.