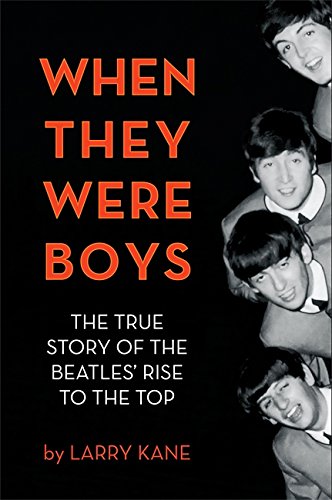 When They Were Boys: The True Story of the Beatles’ Rise to the Top

Kane (Ticket to Ride), a longtime Philadelphia journalist and author who covered the Beatles’ first tour in the U.S. in 1964 and subsequent tours, works by mosaic in piecing together the shards of “the boys’ ” early stories in Liverpool, now fairly familiar: John, the smoking, dreaming milkman, raised mostly by his indomitable Aunt Mimi, sneaked out to the neighboring orphanage Strawberry Field for a dose of gritty reality; Paul, shattered by his mother’s early death from breast cancer, traded the trumpet his father gave him for an acoustic guitar; George, the so-called quiet Beatle, was in fact the stronger songwriter early on but was “shoved into the background” by team Lennon-McCarthy; and Richie Starkey, aka Ringo, hailing from the toughest neighborhood in Liverpool, son of a divorced mother, cut his drummer’s teeth with Rory Storm and the Hurricanes. Self-promoting Lane tracks the musical inspirations that led to the definitive formation of the Lennon-organized Quarrymen, such as Lonnie Donegan, the band’s first gigs in Liverpool, the mysterious death of Stuart Sutcliffe, the firing of Pete Best, the playing of “Love Me Do” in Hamburg, and the honing of their look from black leather jackets to futuristic suits and ties. Many roiling, conflicting voices are brought together in a creative mishmash here. Agent: Faith Childs, Faith Childs Liererary Agency. (Aug.)
close
Details