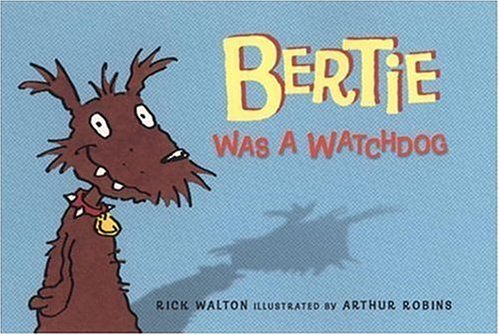 BERTIE WAS A WATCHDOG

When first seen against a receding cityscape, Bertie the watchdog appears to possess all the looming menace of a modern-day Cerberus. But as Walton () dryly explains, "Bertie was called a watchdog because he was about the size of a watch." Robins () cheekily reveals that when Bertie is rendered from a less distorted perspective, he's not even pint-sized. What chance does a diminutive dog have against a giant intruder? But when a burly burglar invades his territory, Bertie challenges him to a test of wits. In Robins's gleefully garish, full-bleed watercolor-and-ink cartoons, the robber takes up most of the succeeding spreads—even his sausage-like nose is bigger than Bertie. But the canine prevails by conning the ne'er-do-well into a series of contests, the last of which determines who can bark the loudest. The robber's winning ruckus captures the attention of a couple of cops on a fast-food break. "I win!" is the parting riposte of the triumphant Bertie, now the proud owner of an oversize hero's medal. Youngsters will be won over as well—both by the pooch's brainy pluck and the reassuring moral that right can triumph over might. Ages 4-7.