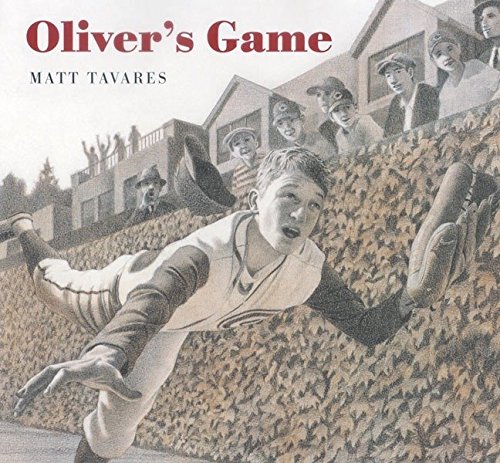 Tavares ( ) here throws out another affecting baseball yarn, which opens in Oliver's grandfather's Chicago memorabilia store, whose name, "Hall's Nostalgia," drives home the tenor of the tale. Oliver, who loves listening to stories about what the man calls "the Golden Age of the Game," one day finds a vintage Cubs uniform stashed away in the store. His grandfather, also named Oliver, then tells the story of how he earned the uniform. Some of the early scene-setting illustrations feel uncharacteristically static, but Tavares's softly focused, sepia-toned pencil and watercolor illustrations take on a credible period quality as the narrative flashes back to the fall of 1941. That year the Cubs manager sees Oliver's grandfather, at the age of 18, hit a home run while playing stickball. In what may be a stretch of credibility for some readers, the manager invites the boy to practice with the Cubs. The onfield images of (the elder) Oliver reaching for a ball in left field and at bat are especially well rendered, the emotions palpable. After witnessing the rookie's batting prowess, the coach invites him to try out for the team the following spring. But two months later, the U.S. enters WWII and the teen joins the Marines. An injury at Guadalcanal ends his ball-playing dreams, but he finds a way to keep the sport an integral part of his life. Tavares suffuses his text, his art and both of his characters with a tangible love of baseball. Ages 6-10.