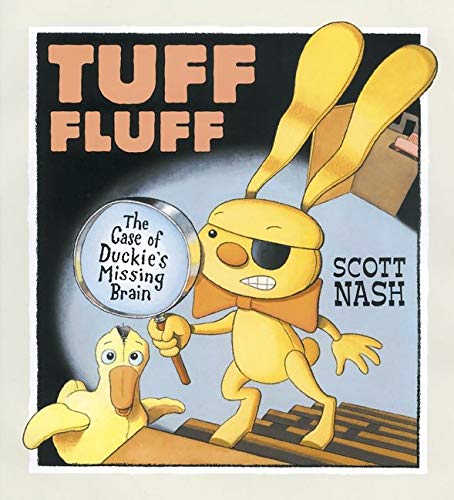 In this soft-boiled detective story, based on a witty rivalry between beanbag toys and "stuffs," a terry-cloth duck literally loses his mind. Tuff Fluff, P.I., a plush rabbit whose eyepatch suggests a checkered past, takes the case from an unlikely dame: a carnival-prize blue teddy bear too big to fit in his office. "Relax, Ursa Major," Tuff tells her as he scrutinizes the empty space in Duckie's head. On a hunch, Tuff heads for hostile Beantown, where he senses the suspicious "stares of itty-bitty beanie eyes." "To the beans, stuffs were riffraff, the old toys," Tuff growls. "To us, beanbags were simply the newest batch of castoffs." Nevertheless, he befriends the citizenry and, with a cottony puff and one generously donated bean, transforms Duckie from a quacking simpleton to a pedant: "Gadzooks! Allow me to convey my sincere thanks to you heroic Samaritans," the duck effuses. Nash ( ) places the toys in a noirish, forgotten realm called Los Attic, but they don't act pessimistic; Tuff mentions "a cute little flowered rabbit" from Beantown, although none is pictured. In the punchy gouaches, shadowy backdrops contrast with the toys' candy colors, which seem illumined by an interrogation lamp. Nash cleverly parodies the detective shtick with tight, pithy phrases and the lost-toy formula with his plot twists. Ages 6-9.