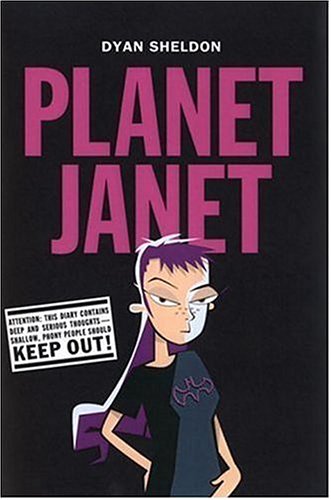 In this often funny but ultimately disappointing novel, 16-year-old Janet journals about life in the "Dark Phase," in which she and her best friend, Disha, attempt to "be in touch with the stuff. The pain and joy." In her quest, Janet tries yoga from a book and gets her nose pierced, but she is oblivious to the issues going on around her. The boy for whom she became a vegetarian is obviously not interested in her; the girl hanging outside her house is actually stalking her brother; and her father's having an affair with a neighbor, causing her mother a considerable amount of stress. Janet's cluelessness can be comical, such as when she and Disha fail to make the connection between the candles they are using for a spell and the smoke alarm going off in the house, or when she is outraged by her father's suggestion that she vacuum ("If he thinks I'm going to be his , he can think again"). Sheldon includes interesting details about many of the characters in the book (Janet's grandmother was a spy and her lesbian aunt is having a baby, for example). But unlike the cast of her , the people here mostly fail to come alive. Janet's antics are entertaining, but she herself is not particularly likable and the narrative seems derivative, rather than energized with the fresh repartee of Sheldon's previous novels. Ages 14-up.