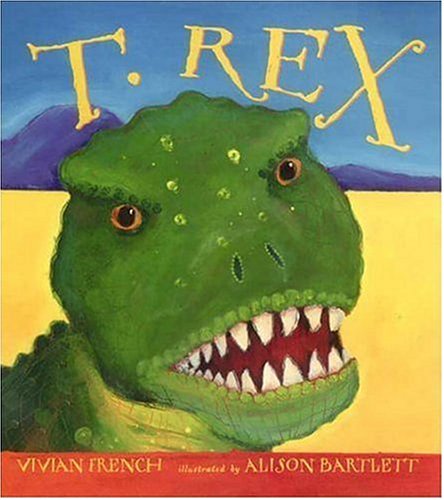 This brief tale simply and succinctly sums up how much is still unknowable in the scientific world, while also acknowledging how much can be proven through study. In a rollicking, rhyming dialogue with his grandfather, a boy discovers the thrill of the intellectual hunt while touring a T. Rex exhibition. "Did he rip and tear as he charged and leapt,/ as he thundered after his panicking prey?" asks the boy, as Bartlett (who teamed up with French for ), working in saturated acrylics and bold shapes, travels back to the era when T. Rex was indeed king. "Maybe yes, or maybe no," says the grandfather, a response that serves as the book's refrain, "it was millions and millions of years ago." The text eschews quotation marks; the boy's questions appear in italics, while boldface type connotes grandfather's responses. Grandfather is not clueless; rather, he points out how paleontologists can agree on many matters (brief, digestible facts annotate many of the pictures), while contending others, such as whether T. Rex was an aggressive predator, or if "he might have hunted for secondhand prey,/ a scavenger clearing the dead away." French understands that uncertainty can feel frustrating and even overwhelming to children ("How can I know what's true?" the boy finally demands). But the author eloquently makes the case that a willingness to seek answers, rather than merely receive them, has its own rewards: "Maybe one day we'll know…,/ Maybe we'll know what's really true./ The person to tell us/ might just be !" Ages 5-8.