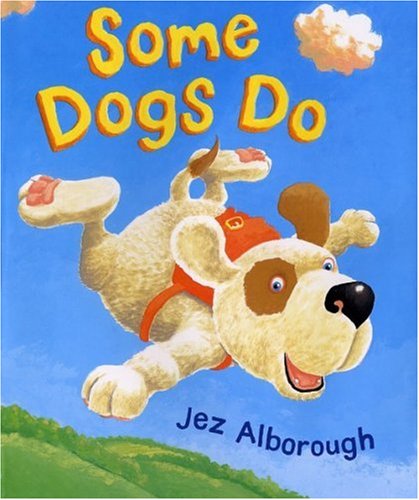 This tale seems stale compared with Alborough's previous work in or When Sid the puppy "set[s] off for school one day, a happy feeling [comes] his way." Suddenly, he finds himself literally light as air and flying among the clouds, but when he tries to prove his ability to his scornful, mocking classmates, he fails miserably. Sid looks like a fetching stuffed animal prototype in Alborough's characteristically energetic gouaches, here effectively divided into panels to indicate successive actions. However, the clunky text weighs the book down with clichéd ideas. The climactic scene features Sid's father sounding more like a child psychologist than a hound dad: " 'I know a secret, Sid,' he said./ 'Could you keep it safe inside?' " The narrator helpfully rhymes, " 'What's the secret?' Sid replied." When Sid watches his father flying, he learns the answer: "Do dogs fly? Is it true? Some dogs don't, and some dogs do." Children just learning to distinguish fact from fancy may have difficulty understanding what their negative or positive feelings (or scorn from their classmates) have to do with metaphorical flight. Ages 3-7.