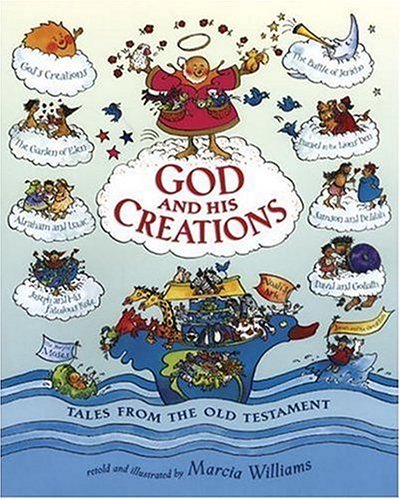 GOD AND HIS CREATIONS: Stories from the Old Testament

Bringing her trademark comic-book style to the Bible, Williams ( ) may once again have readers smiling at the Old Testament. Here she offers taut and trenchant renditions of Creation, the Fall, Moses, Daniel and the lions' den, and seven other favorite scriptures. As the stories unfold in panels, angels look on from the margins ("He's beat," says one, grinning indulgently as roly-poly, white-bearded God stretches out to snooze on a cloud on the seventh day of creation), where the serpent joins them after he is chased from Eden (he cheers on the wicked). One fine instance of Williams's comedy can be found in the tidy, 40-panel page she creates as part of the Noah's Ark story: readers see the Ark tossed upon the waters, hearing only the animals' complaints from panel to panel about the endless diet of hay ("wet hay," "dry hay," "leftover hay," etc.). Williams works in graver issues, too. When Abraham leads Isaac to be sacrificed, one of the observing angels says, "I blame Adam and Eve," and another replies, "I blame the serpent." While she shows God righteously angry (causing the Flood, enraged at Jonah), essentially her God is not only lovable but adorable, his pockets stuffed with stars and small friendly creatures. The wit, the snappy pace and wry details should easily engage the target audience. Ages 8-12.