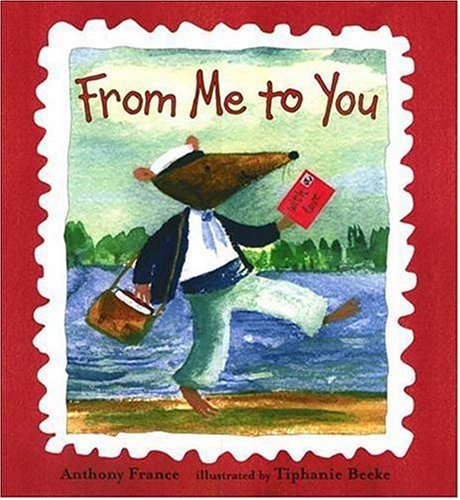 FROM ME TO YOU

Rat wakes up with a "case of the bathrobe blues." He's down in the dumps because his friends haven't come to visit, and "doing nothing with no one is no fun at all." But the day brightens with the arrival of an unsigned note telling him he's "very special." Cheered by this gesture, Rat sets out to find the letter's author. He quickly discovers that, far from ignoring him, his buddies have problems of their own: Mouse's roof needs fixing, Frog has a broken leg and Bat, who is hanging around his house in his own bathrobe, is just plain lonely. Seeing his friends in need erases Rat's self-pity, and British author France underscores this point in a touching but not heavy-handed, scene: "If I were a real friend," says Rat, "I would have visited [Bat] before. The only reason I went today was to find out something for myself." Young readers exploring early relationships will find much in common with Rat as he transforms from self-absorbed to thoughtful of others. Beeke's ( ) intense watercolor tones echo Rat's journey, evolving from cool blues to bright hues; she uses depth, texture and intriguing details (such as Rat's flowerpot-shaped house) to draw in readers. With its absorbing visuals and positive message, this standout will become a familiar, well-thumbed friend. Ages 4-7.