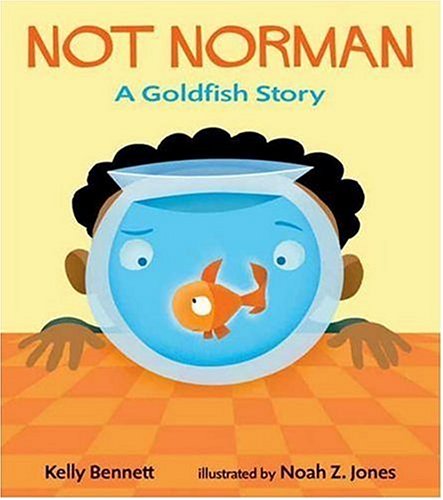 NOT NORMAN: A Goldfish Story

To say that Norman the goldfish is a disappointing birthday present is putting it mildly. "I wanted a different kind of pet," the unnamed boy narrator grumbles as he stares into the bowl. " ." In fact, Norman is one big refutation of what defines a pet: the fish can't cuddle, doesn't exude coolness and won't fetch. "All Norman does is swim around and around and around and around and around and around and around and around...." Little by little, however, the boy is won over by Norman's vulnerability (when the hero cleans the "gunky" green stuff from Norman's bowl, the bright orange fish literally jumps for joy), finny winsomeness and steadfastness (especially on one particularly spooky night). This emotional turnaround never feels forced or pat, thanks to a strong partnership between Bennett's text and newcomer Jones's artwork. The off-the-cuff yet kidlike prose ideally suits the bright, crisp digital drawings, which resemble the kicky, stylized animation found on Cartoon Network. By the time the boy declares, "[E]ven if I could pick any pet in the whole world, I wouldn't trade him. Not Norman," readers will cheer the birth of a beautiful friendship. Ages 4-8.