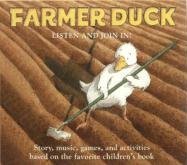 Candlewick teams with British sister company Walker Books for this adaptation of Waddell's popular picture book. A reading of the full text kicks off a program jam-packed with extras. Oddie gives the lazy farmer an appropriately grating voice as he continually hollers, "How goes the work?" to the ever-laboring Duck. Gibson's original music makes a pleasant accompaniment, though in the places where Oddie uses a softer tone, it nearly overpowers him. Oddie and Aldred then lead listeners in a series of games and activities including identifying animal sounds, imagining being an animal and acting out passages of the story—many of them suitable for preschool classroom or playgroup use. Near the end of the proceedings, a cast of children perform the story as a mini play and listeners have the opportunity to tell the story themselves, karaoke-like, during a track that has music only. The youngest listeners may puzzle over a stray Britishism ("cockerel" instead of rooster) and may initially have some difficulty with the British accents, but overall, the upbeat, creative energy here is likely to win over a large audience. Ages 3-7.

Can't You Sleep, Little Bear? This Is the Bear