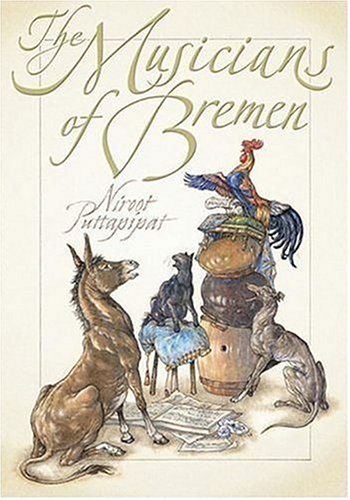 The Musicians of Bremen

From Rackham to Cruikshank, from Disney to the Muppets, the Grimm brothers' tale has been appropriated in many mediums, but for Puttapipat's first picture book, he has chosen an early 17th-century setting for his full-color and pen-and-ink sketches. The robbers exhibit the stylishness of villains from the Three Musketeers, and the animals are as finely rendered as if they were taken from paintings in some fairy tale castle. Puttapipat's retelling closely resembles the original Grimm version (within a frame story that seems unnecessary), about a greyhound, rooster, cat and donkey whose masters were about to get rid of them because they were old. They all decide to run away to Bremen town, and the artist's watercolors move from realistic renderings of the animals to an almost mystical vision of the robbers' cottage at dusk. More comical scenes depict the quartet scaring away the robbers and claiming their digs for themselves. Although animals' instruments are nowhere to be seen in the illustrations, the spot art is filled with scrolls of sheet music, and much is made in the text of the instruments the animals choose to play ("Come and be the violinist to my lutenist and Dog's drummer"). Unfortunately, the narrative's emphasis upon the instruments minimizes the humor to be found in the discrepancy between the racket made by the animals' braying, meowing, barking and crowing, and the "music" they imagine they are making. Ages 4-8.