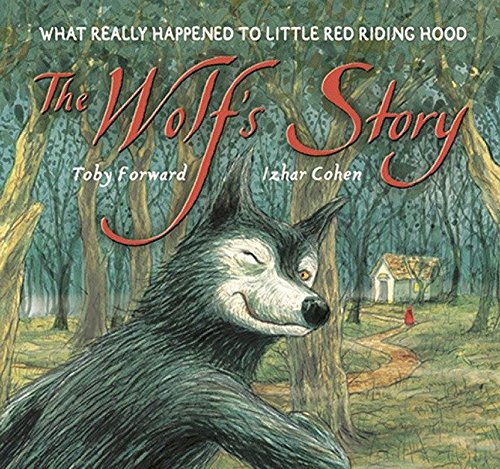 Forward ( ) adds to the growing list of fractured fairy tales with this wolf's version of events involving Little Red Riding Hood, delivered directly to readers in often witty banter ("I did odd jobs for the old woman. Called her . We were close"). But the furry fellow, a self-proclaimed vegetarian, portrays himself as vulnerable and insecure when describing "Little Red." ("Me, I didn't like the kid being there.... I felt left out.... They just ignored me.") Cohen's detailed watercolors shape the wolf's perspectives via different senses; the red-caped girl is depicted through his agape mouth—with many sharp teeth—as a reflection in his deep-set eyes and framed by his furry ears. The illustrations also help play up the discrepancies in the narrator's version of events (when the wolf "help[s]" Grandma try to get down her dress, she gets "a teeny tiny bump on the head that knocked her cold"). The story maintains a sense of humor throughout and ends with the wolf hamming it up yet again: "And if you ever want any odd jobs done around the house... Here's my card." His bookend refrain—"Would I lie to you?"—conjures up an image of the oily salesman. Ages 4-8.