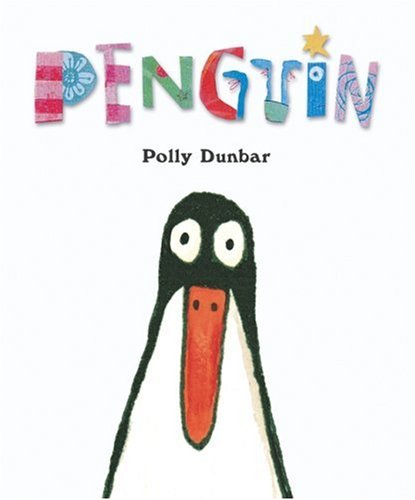 Dunbar’s ( ) winsome mixed media illustrations carry the day in a story that pulls a few punches on readers. From the striking white cover illustrations of Penguin with the title displayed in textured primary colors, to the blue Sendak-like lion that precipitates the denouement, the illustrations are child-centered, deceptively simple, and satisfying. No matter what Ben does, his new penguin won’t respond. The white background focuses attention on the characters, while Dunbar’s use of line is particularly effective in showing Ben’s mixed emotions. The abrupt resolution of Ben’s problem, however, while creative, could be problematic. When a passing Lion swallows the frustrated toddler for noisily shouting, “SAY SOMETHING!” Penguin bites Lion’s nose. Ben is instantly burped up, and finally, “Penguin [says] everything.” But Penguin’s way of “saying everything” is to use pictures; these are contained in a huge speech bubble. Because the book initially seems to present a real boy and his stuffed toy, Lion’s appearance seems surprising, as if a phoenix emerged in the middle of a pioneer diary. This change in the construction of the reality of the story may be baffling or intriguing depending on the reader, but nearly everyone will enjoy retracing and comparing the narrator’s story told in words with Penguin’s story told in pictures. Ages 4-7.