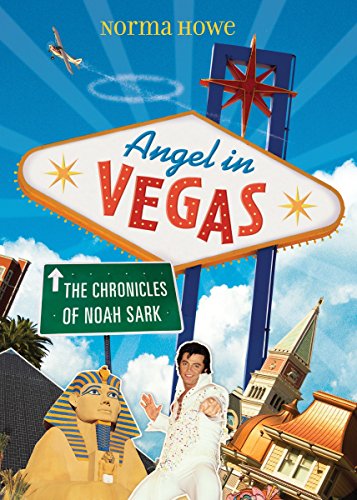 Angel in Vegas: The Chronicles of Noah Sark

Howe (the Blue Avenger trilogy) offers the odd pairing of Las Vegas kitsch and a purported angel in this stylized sideways tourist travelogue. Waking up in the bathroom of Angelo's Donut Shop, Noah Sark reveals that he has arrived on Earth for his latest guardian angel gig. When he meets Andy and his girlfriend, Barbra, he knows he's found his target—“Bulletins from Above” trigger a stabbing pain in his head to get his attention. Breathlessly explaining to readers that Barbra is a ringer for his failed last assignment, Princess Diana, Noah believes he must take all of his experience from that fateful sojourn in Paris to redeem himself. He gets an introduction to all things Vegas: Elvis impersonators, poker-playing dogs, pirate ships, dancing waters, and more, while mooning over Barbra and seeking to protect her from whatever terrible fate might come. Howe's style is droll, but the story is flat and meandering. Her double-take ending will either make readers resentful or want to reread the book with a new perspective, reconsidering chance, coincidence, and fate. Ages 12–up.