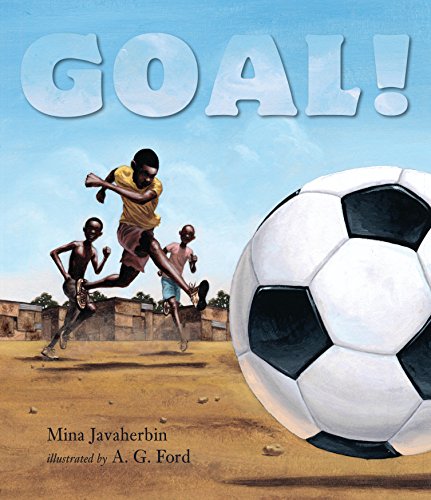 In her debut picture book, Javaherbin crisply relays a simple story that should strike a chord with a wide range of readers. In a barren South African village, Ajani calls for his friends to come out to play soccer. The boy carries the pristine federation-size ball (which he won for being the best reader in class) in a dented pail he'll later use to fetch water. Ford's ( ) dramatically lit oil paintings convey Ajani's excitement and pride about his new acquisition (“We are real champions, playing with a real ball”). He and his friends are also wary of bullies who roam the streets, and one boy stands guard on a rooftop. When the mean boys arrive, Ajani surreptitiously kicks the soccer ball into the overturned bucket and the oblivious bullies instead steal an old plastic ball nearby, barking, “No playing soccer here or you'll be sorry.” While the level of danger—and deprivation—these boys face may be unfamiliar to many American readers, the quick-moving soccer action, tension, and triumph over the common threat of bullies have near-universal appeal. Ages 6–10.