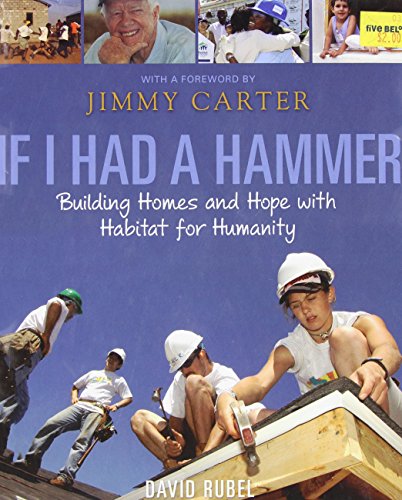 If I Had a Hammer: Building Homes and Hope with Habitat for Humanity

In a foreword, former president Carter, who became a hands-on participant in Habitat for Humanity after leaving office, notes that in Habitat's homebuilding work he and his wife, Rosalynn, have found a way “to put our faith into practice.” Personal insights from the Carters, other volunteers, Habitat homeowners and several celebrities who have worked with the organization (Jamie Lee Curtis, Garth Brooks) add diverse voices to Rubel's ( ) uplifting account of the group's mission and accomplishments. The book offers many intriguing nuts and bolts, as Rubel offers a chronicle of Habitat's origins and detailed rundowns of construction processes. Especially eye-opening are vignettes about projects in developing countries, where Habitat strives to reconcile modern building methods with local customs (as when “outdoor toilets are the cultural norm and indoor toilets are considered bizarre”). Copious photos of substandard housing in the U.S. and around the world, the Habitat homes that replaced them and the gratified residents who helped build them underscore both the physical and emotional benefits of the group's work. Ages 9–13.