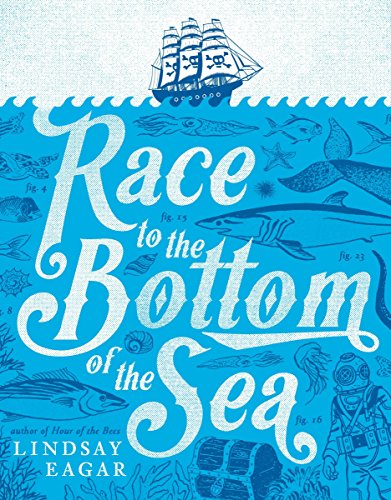 Race to the Bottom of the Sea

The tidal pull of Eagar’s swashbuckling pirate adventure has its source in 11-year-old Fidelia Quail. The daughter of acclaimed marine biologists, Fidelia takes an active role in her parents’ work, even inventing the research submarine they employ to explore the ocean depths. After the perilous and unpredictable “Undertow,” a deadly current, destroys the submersible while her parents are cataloguing sharks, a grief-stricken and guilt-ridden Fidelia moves in with her Aunt Julia, a librarian. Tension escalates when Merrick the Monstrous, captain of the Jewel, kidnaps Fidelia in order to retrieve treasure from the ocean floor with her not-yet-completed creation, “the Water-Eater.” Pitting Merrick against a corrupt admiral, Eagar (Hour of the Bees) makes the complicated pirate (who “spoke like a man with nothing to lose”) both threatening and sympathetic, giving him a romantic past. Set in a world that combines futuristic and historical elements to intriguing effect (Fidelia wears a pinafore, but knows her way around “Hydro-Scanners” and other tech), this is an exciting maritime adventure with a strong, layered heroine. Ages 8–12. Agent: Sarah Davies, Greenhouse Literary. (Oct.)