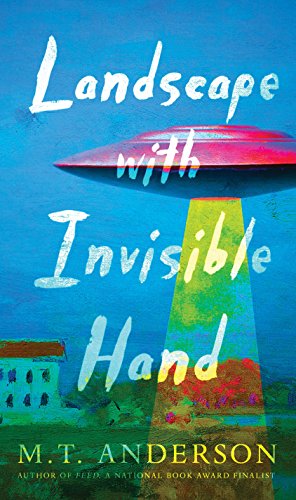 Anderson (Symphony for the City of the Dead) sets this biting and brilliant satire on a near-future Earth where an alien race called the vuvv has brought advanced technology and cures for disease—and ushered in the collapse of Earth’s economy. Adam Costello, a 15-year-old artist beset by gastrointestinal illness, and his family are among the many desperate for money and work. Reluctantly, Adam and his girlfriend, Chloe, broadcast an exaggerated 1950s-quaint, pay-per-view version of their romance to the vuvv, who are entranced by “classic” Earth culture—doo-wop music, still-life paintings, and the notion of true, everlasting love. With Adam’s relationship with Chloe imploding, his illness worsening, and his art gaining vuvv attention, he must decide whether to bend to the whims of the vuvv or stay true to his humanity. Adam narrates in gloomy, vignettelike chapters whose titles (“Autumn in a Field Near a Discharge Facility”) give the sense of each scene existing as a painting in itself. The vuvv, described as resembling “granite coffee tables: squat, wide, and rocky,” are only interested in the parts of Earth culture they choose to acknowledge, and ignore the sweeping damage they’ve inflicted. “I just love the human race,” one of the vuvv tells Adam, patronizingly. “You people are so much more spiritual than we are.” Anderson takes issues of colonialism, ethnocentrism, inequality, and poverty and explodes them on a global, even galactic, scale. A remarkable exploration of economic and power structures in which virtually all of humanity winds up the losers. Ages 14–up. Agent: David McCormick, McCormick Literary. (Sept.)
close
Details