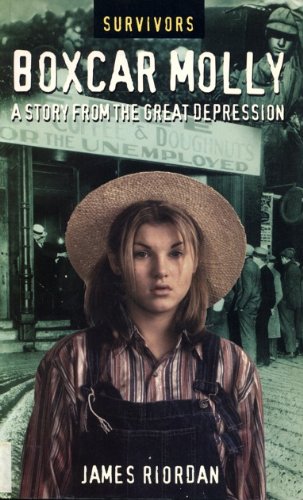 BOXCAR MOLLY: A Story from the Great Depression

One of six inaugural titles in the Survivors series being released this month, this disappointing novel centers on Tennessee-born Molly, who recounts her three years (1929–1932) riding the rails as she searched for work during the Depression. The framing of the tale is rather hokey: after "Aunt Molly" (with "tears rolling down her wrinkled face") sings "Brother Can You Spare a Dime?" to her niece and nephew, she tells them about the time when, at age 14 in 1929, she went to work in a knitwear factory to help support her family. After seven months on the job, Molly impulsively ("Goodness knows what came over me," she says) hops a truck bound for Kentucky, where she finds no work available, then launches a journey as a self-described "tramp," crossing the country on freight trains. There she meets others, including Beanpole, an African-American two years her senior who becomes her closest friend (and later, her husband); Woody Guthrie, Upton Sinclair and Douglas MacArthur, among others, make cameo appearances in this rather choppy chronicle. Despite some dramatic and trenchant moments—including Molly's descriptions of living conditions in a migrant workers' camp in California and a Manhattan Hooverville—too often her chronicle reads as an impersonal, dry travelogue. Ages 10-13.