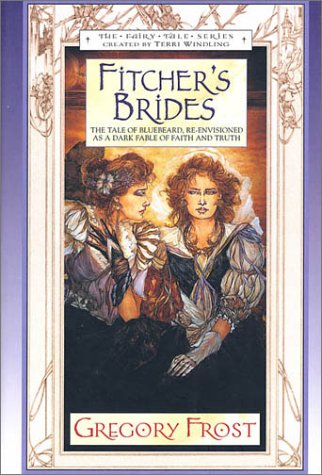 In the latest addition to the Fairy Tale Series created by Terri Windling, fantasy author Frost (; ) provides a fresh and highly readable spin on the classic Bluebeard tale, setting his version in New York's Finger Lakes district during the 1830s. Charismatic preacher Elias Fitcher, the Bluebeard figure, has set up a utopian community that prays and works while awaiting the end of the world prophesied for 1843. Into this hotbed of religious fervor comes the Charter family from the nearby town of Jeckyll's Glen. The father and stepmother succumb to Fitcher's mesmerizing preaching, but it is the three daughters—Vernelia, Amy and Catherine—who listen to household spirits and end up, each in turn, marrying Fitcher, then vanishing, except for Catherine, the youngest. In order to survive, Catherine must use her wits and the understanding passed on from her sisters. Exploring such adult themes as lust, masochism and desire, Frost neatly counterbalances the underlying threads of wifely curiosity and disobedience with the growing awareness of true evil in Fitcher, the elements that have made the fairy tale such a timeless story. Some readers may want to save Windling's introduction, which traces the historical legend through its roots in folklore to the narrative of Frenchman Charles Perrault, for last, in order to enjoy the novel for its own sake.

The Year's Best Fantasy and Horror