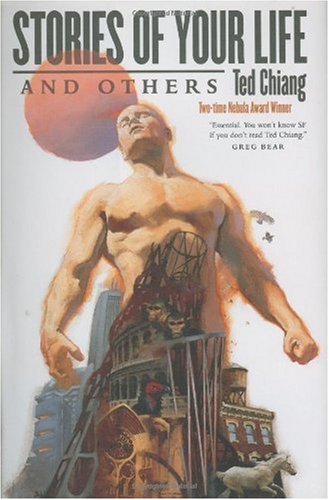 STORIES OF YOUR LIFE AND OTHERS

Here's the first must-read SF book of the year. Chiang has acquired a massive reputation on the basis of very few pieces of short fiction. This collection contains all six previously published tales, including the Nebula Award–winning "Tower of Babylon," plus a new story, "Liking What You See: A Documentary." It's rare for a writer to become so prominent so fast. In this case, though, the hype is deserved. Chiang has mastered an extremely tricky type of SF story. He begins with a startling bit of oddity, then, as readers figure out what part of the familiar world has been twisted, they realize that it was just a small part of a much larger structure of marvelous, threatening strangeness. Reading a Chiang story means juggling multiple conceptions of what is normal and right. Probably this kind of brain twisting can be done with such intensity only in shorter lengths; if these stories were much longer, readers' heads might explode. Still, the most surprising thing is how much feeling accompanies the intellectual exercises. Whether their initial subject is ancient Babylonians building a tower that reaches the base of Heaven, translation of an alien language that shows a woman a new way to view her life as a mother, or mass-producing golems in an alternative Victorian England, Chiang's stories are audacious, challenging and moving. They resemble the work of a less metaphysical Philip K. Dick or a Borges with more characterization and a grasp of cutting-edge science.