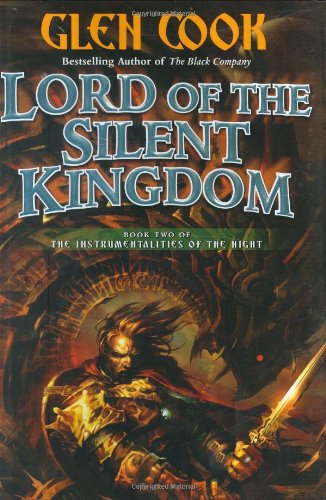 Lord of the Silent Kingdom: Book Two of the Instrumentalities of the Night

The elaborately wrought second installment (after 2005's ) in Cook's dark military fantasy saga promotes Piper Hecht—previously known as Else Tage before he vanquished an immortal foe—to the rank of captain-general under Emperor Sublime V. While Piper staves off the menace of the Tyranny of the Night, which is slowly freezing the lands around the Mother Sea, he also battles the Patriarchs, stubborn in their opposition to imperial rule. Cook ups the intrigue when Piper discovers a necromancer lurking among his supposedly trustworthy allies, while a prophet thought long dead reappears and allies himself with the captain-general. The lovely and intelligent Anna Mozilla warms Piper's bed and heart when he's not occupied with magical and military threats. Though Cook makes few concessions to new readers, his fans will enjoy the sword fights and potent magic, all motivated by complex religious and political power struggles.