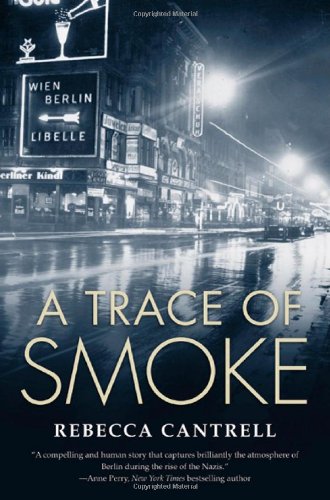 A Trace of Smoke

Set in 1931 Berlin, Cantrell’s scrupulously researched debut tolls a somber dirge for Weimar Germany in its last days. In the Hall of the Unnamed Dead, Hannah Vogel, a 32-year-old crime reporter for the , recognizes a photograph of a naked corpse on a riverbank as that of her beloved brother, Ernst, an unabashedly gay transvestite cabaret singer. In her search for Ernst’s killer, Hannah uncovers his sexual connections reach from newly recruited young Nazis to the highest levels of the Nazi party. Hannah and Anton, a five-year-old waif who claims Ernst was his father, along with her tender lover, Boris, tread an ominous tightrope as Cantrell unveils the best and the worst of the German character, setting the humanity of decent Germans, Jews and gentiles alike, against the Nazis’ raw savagery and mindless militarism. This unforgettable novel, which can be as painful to read as the history it foreshadows, builds to an appropriately bittersweet ending.