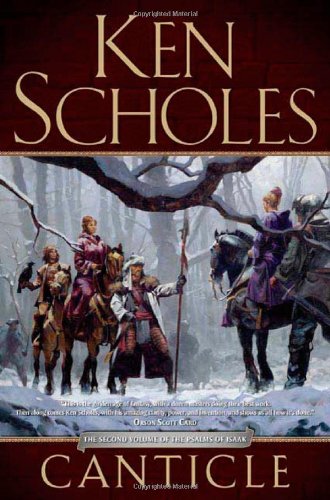 Canticle: The Second Book of the Psalms of Isaak

The sequel to Scholes's stellar debut, 2008's , ingeniously fuses epic fantasy and postapocalyptic science fiction. Magicked assassins kill numerous leaders from across the Named Lands and send the region into economic and political turmoil. Amid the chaos, Jin Li Tam gives birth to General Rudolfo's son, sickly Jakob. As Rudolfo sets out in search of a cure, young Marsh Queen Winters ascends the throne of her people only to realize her past has been an elaborate lie; former Androfrancine Pope Petronus risks his life to bring some semblance of peace to the realm; and Nebios ben Hebda uncovers bombshell revelations regarding the Order's “metal men” and the history of the Old World. Abounding in prophecy, myth and mystery, this grand-scale saga is a towering storytelling tour de force.