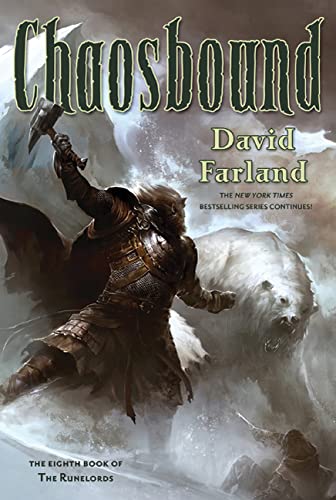 Chaosbound: The Eighth Book of the Runelords

The stark, dark and elegiac eighth installment of Farland's Runelords fantasy saga (after 2008's ) centers on heroes Borenson and Myrrima, fresh from a gallant fight against unspeakably evil world dominators. Flameweaver Fallion, trying to unite the shattered One World, binds Borenson with Aaath Ulber, a giant horned berserker warrior. As their worlds and personalities merge, Borenson loses his human identity and family, but acquires a superhuman mission: to help Fallion bind all the worlds, uniting humans and defeating the wyrmlings forever. In this somber celebration of brutality, Farland ponders the fuzzy line between honor and obsession in a world where compassion comes with a high price. As the series grows in complexity, its appeal narrows, mostly drawing readers who like philosophy and complex machinations soaked in mud and blood.