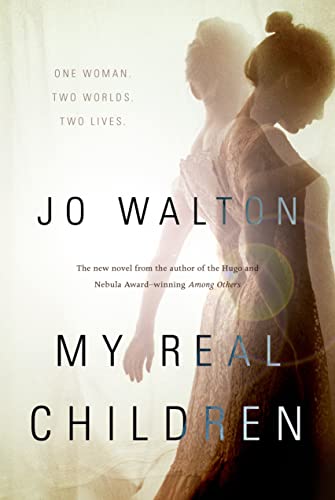 Jo Walton’s My Real Children is a bit like a novel written from the point of view of Schrödinger’s cat, except that instead of a cat we have a smart, sympathetic Englishwoman named Patricia, and she’s not alive and dead, she’s alive twice—she lives two parallel lives, in two distinct worlds, both of which are apparently equally real. While the premise of My Real Children is science fictional, its tone is that of literary realism. Patricia is born in 1926, but when we first meet her she’s almost 90 and in a nursing home, where her confused memories of two different pasts are taken as a symptom of senile dementia. Patricia isn’t so sure. “It was just that things were different, things that shouldn’t have been different,” she thinks. “She remembered Kennedy being assassinated and she remembered him declining to run after the Cuban missile exchange. They couldn’t both have happened, yet she remembered them both happening.” In 1949, shortly after she graduates from Oxford, Patricia receives a marriage proposal from a pushy suitor named Mark, a devout Christian. In the life where she says yes, Mark and Trish (as she’s called) wind up in a terrible, loveless union; she’s a stoic, philosophical soul and a devoted mother who eventually gets involved in local politics. In the other life, where Patricia goes by Pat, she turns Mark down and later has a loving partnership with a woman named Bee and a joyful career writing travel guides. Walton tells both stories in the same even, unfussy tone: no matter how well or badly things go for Pat or Trish, the narration remains observant but calmly, coolly distant. The fortunes of the wider world flop the opposite way. Pat lives in a world of nuclear exchanges and rabid intolerance. Trish’s world chooses peace and international cooperation in space. (Each world is recognizably related, but not identical, to our own.) Comparing the two, Patricia is forced to wonder: did her choice split not just her own life, but the history of the entire species? Do we all possess that power, and the responsibility that comes with it? My Real Children has as much in common with an Alice Munro story as it does with, say, Philip K. Dick’s The Man in the High Castle. It explores issues of choice and chance and destiny and responsibility with the narrative tools that only science fiction affords, but it’s also a deeply poignant, richly imagined book about women’s lives in 20th- and 21st-century England, and, in a broader sense, about the lives of all those who are pushed to the margins of history: the disabled, the disenfranchised, the queer, the lower middle class. My Real Children is a quiet triumph, not least because whatever life Patricia happens to be living at any given moment, she remains deeply and recognizably herself. Good novels show us a character’s destiny as an expression of who they fundamentally are. What most novels do only once, My Real Children does twice. Lev Grossman is the book critic at Time magazine and author of the forthcoming novel The Magician’s Land.
close
Details