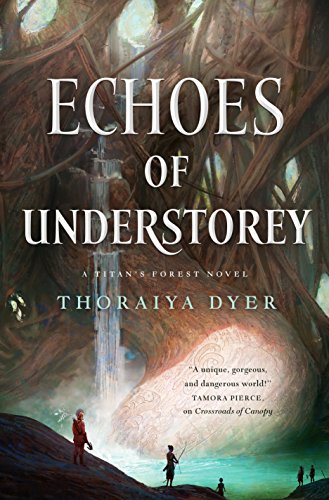 Dyer’s expansive second Titan’s Forest fantasy (after Crossroads of Canopy) finds turmoil and prejudice in the human cities of Canopy, Understorey, and Floor, which all exist within colossal trees. Understorian Imeris, the best fighter in the Loftfol training school, hopes to achieve glory by killing the body-snatching sorceress Kirrik, a task her three adoptive fathers have failed to accomplish. After Imeris and Oldest-Father encounter Kirrik in Floor and suffer a devastating defeat, Imeris looks to gain knowledge and skills from her new friend, the sad but gifted green-skinned shape-shifter Anahah. Suddenly, Imeris is conscripted into a hunt to kill a rampaging patchwork creature that was created by the vindictive goddess Orin of Canopy to destroy her traitorous bodyguard. In confronting the creature, Imeris, Anahah, the burly slave Daggad, and blacksmith Sorros (whose daughter’s body Kirrik now inhabits) travel between Canopy and Understorey, use magical artifacts, confront the evils of slavery, seek Imeris’s birth parents, and dodge the petty whims of living deities. There’s far more to this story than can easily be summarized, and readers will savor its intricacy, depicted in evocative prose (“the monsoon greeted her with a wet slap across the face”). Dyer skillfully weaves elements of mythology, family loyalty, and divine destiny into a distinctive, enchanting, and complete world. Agent: Evan Gregory, Ethan Ellenberg Literary. (Feb.)
close
Details