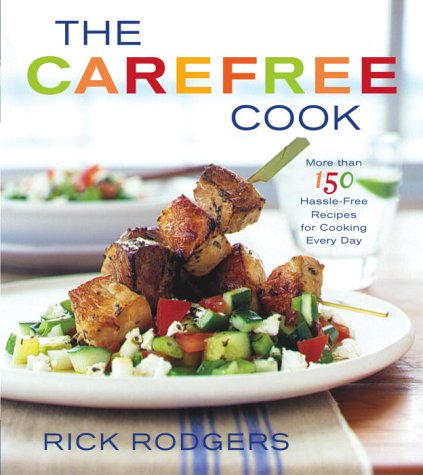 THE CAREFREE COOK: More Than 150 Hassle-Free Recipes for Cooking Every Day

In addition to writing more than 20 books (including ), Rodgers is also a cooking instructor. His first lesson here is that one chef's idea of carefree is another's definition of complex. Semantics aside, this is a well-rounded collection of unusual recipes that are challenging to the palate and hassle-free to those who are advanced enough in the kitchen to own a sieve and a sifter. He also throws in some neat hints, like how to sharpen a knife using a ceramic coffee cup, and includes a list of "Million-Dollar Flavors" to always keep handy (blue cheese, ginger and eight other taste boosters). Catfish en Papillote with Gingered Tomato Sauce is easier than it sounds with the fish, tomato and just a handful of seasonings wrapped tight in foil and baked for 15 minutes. There are also upscale variations on several bachelor pad favorites: Pork Chops in Creamy Mushroom Sauce replaces the canned soup with sherry, sour cream and shiitake mushrooms. Spaghetti is either topped with Pork Meatballs, with uncharacteristic pine nuts and currants, or else stirred up in a peculiar concoction of Cool Tomato Sauce, Green Olives and Goat Cheese. For Warm Blackberry Pie Sundaes, one can use crumbled shortbread cookies as the foundation for the warmed fruit and vanilla ice cream. Black Forest Chocolate Pudding is rife with dried cherries and kirsch. Best not to think about the constant whisking of milk over medium heat till it boils and the five hours it takes the pudding to chill. For Rodgers, carefree is merely a state of mind.