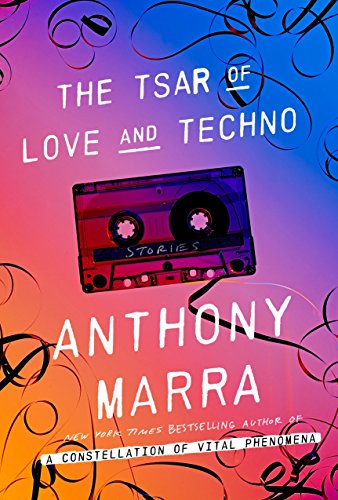 The Tsar of Love and Techno

Marra follows A Constellation of Vital Phenomena (one of PW’s 10 best books of 2013) with this collection of nine interconnected stories, divided into sides A, B, and intermission. They probe personal facets of Russian life, from 1937 to the present—from Chechnya to Siberia and from labor camp to hillside meadow. In the first story, Roman Markin, a Stalin-era specialist in removing purged individuals from photographs and politically correcting artwork, airbrushes out his own brother, then begins secretly inserting his brother’s face into other pieces, including a photograph with a ballerina he’s erasing and a landscape by 19th-century Chechen painter Zakharov into which he’s adding a party boss. “Granddaughters,” set in the Siberian mining town of Kirovsk, focuses on Galina, the ballerina’s granddaughter. Inheriting her grandmother’s beauty if not her talent, Galina captures the Miss Siberia crown, the attentions of the 14th richest man in Russia, and a movie role in Web of Deceit, while her sweetheart, Kolya, ends up fighting and dying in Chechnya. In “The Grozny Tourist Bureau,” deputy museum director Ruslan Dukorov rescues the Zakharov landscape from war damage, then paints in his wife and child—killed, like Kolya, in the meadow depicted in the painting. The title story follows Kolya’s brother to the meadow. “A Temporary Exhibition” shows Roman’s nephew at the 2013 exhibition of Roman’s work arranged by Ruslan and his second wife. Marra portrays a society built on betrayal, pollution, lies, and bullying, where art, music, fantasy, even survival, can represent quiet acts of rebellion. As in his acclaimed novel, Marra finds in Chechnya an inspiration his for his uniquely funny, tragic, bizarre, and memorable fiction. (Oct.)
close
Details