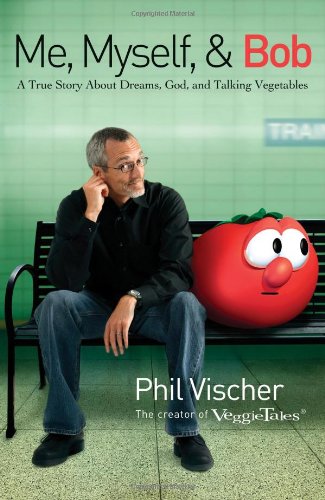 Me, Myself, & Bob: A True Story About God, Dreams, and Talking Vegetables

Have you ever been tempted to start your own business? First read this cautionary tale, especially if you think your ideas come from God. Vischer, a pioneer in computerized animation and creator of Veggie Tales, proves that a pathetically skinny, shy techno-geek can be hilarious even when describing his headlong plunge into bankruptcy. In 1989, "with an unflappable 'How hard could it be' attitude," the 22-year-old entrepreneur launched his dream of creating high-quality Christian entertainment by founding the company that would become Big Idea Productions. Thirteen stressful years later, he was featured in a magazine cover story—"small town kid kicked out of Bible college and down to his last ten bucks creates talking vegetables and hits it big, selling 40 million videos!"—shortly before firing half his staff in an unsuccessful attempt to avert disaster. While Vischer accepts the blame for the collapse ("my strengths built Big Idea, and my weaknesses brought it down"), he also details various unnamed executives' incompetence. One question haunted him: if he was doing God's work, why didn't God rescue his company? Concluding his story of spiritual inspiration and heartbreak, Vischer draws lessons from his experience for anyone who has ever lost a dream.