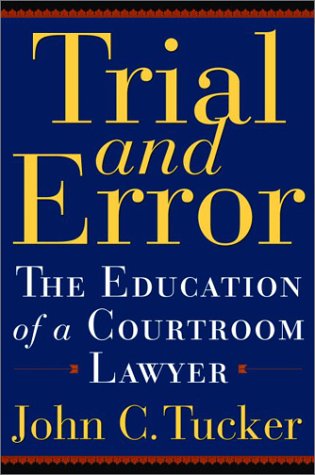 TRIAL AND ERROR: The Education of a Courtroom Lawyer

Midlife crisis or not, at 51 Tucker made an unusual career move: he gave up his partnership and six-figure income with the prestigious Chicago law firm of Jenner and Block to write about legal issues that interested him. In his newest (after ), he turns to professional autobiography and chronicles several of the major cases that shaped his views about the law. Mercifully, they transcend the kind of "war stories" too often told by middle-aged lawyers at cocktail parties. Tucker argued twice before the Supreme Court: his first case involved the question of mental illness and a person's competency to stand trial; the second concerned the controversial practice of patronage hiring (and firing). Tucker prevailed in each, although his first client subsequently fired him for suggesting the use of an insanity defense, even though this was the very issue that had been taken to the Supreme Court. Tucker takes it in stride: "I had long since learned that a client's gratitude is a fragile reed." Despite great material, however, Tucker displays a couple of unfortunate tendencies that lessen the book's impact. First, there's frequently more detail than the general reader needs and, as a result, Tucker's points are buried by needless digressions and asides. Second, while he makes no bones about his biases, sometimes the potshots that he takes at his legal adversaries, particularly Chief Justice Rehnquist, are so unwarranted that they undercut Tucker's credibility. These reservations aside, the author enjoyed the kind of career that most lawyers dream about, and his reflections will be of interest to those in the profession.